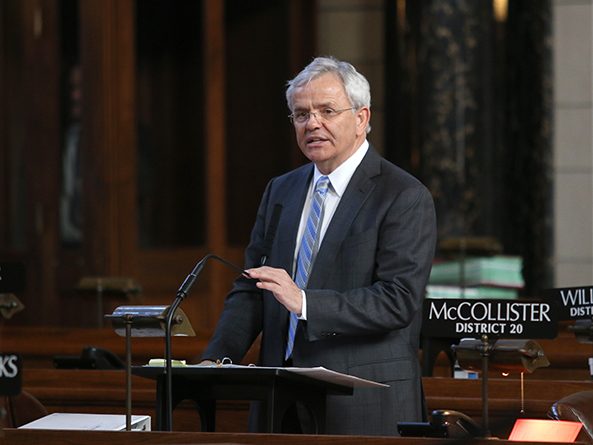 Lawmakers advanced a bill from general file Feb. 27 that would increase the number of district court judges in Douglas County.

LB309, introduced by Omaha Sen. Steve Lathrop, would add one district court judge, increasing the number in Douglas County to 17. Lathrop said the bill is based on a recommendation by the Judicial Resources Commission to ease the judicial workload.

“Having an adequate number of judges is key to making sure people have the same access to the courts and receive the same attention from judges as litigants elsewhere in Nebraska,” he said.

Gothenburg Sen. Matt Williams spoke in support of the bill, saying that people in Omaha are spending two to three weeks in jail, waiting for an available judge to hold a bond hearing.

Sen. Suzanne Geist of Lincoln expressed concern that the state’s problem-solving courts, which are presided over by volunteer judges, could suffer if judges are spread too thin.

“I’m not sure where I stand on this yet, but I do know that there is a big need for spreading the load and helping judges be able to see all the people on their docket that they need to,” Geist said.

Senators advanced the bill to select file on a 35-0 vote.