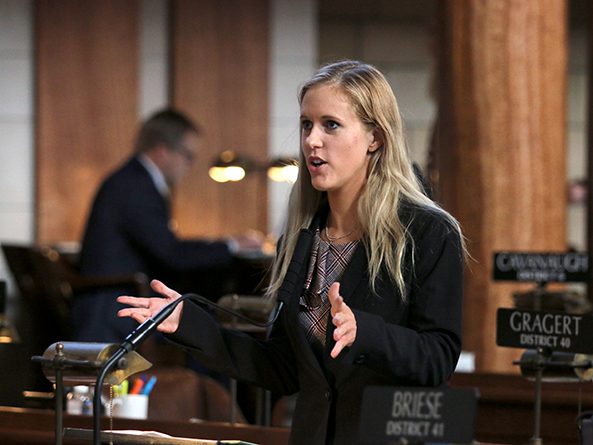 A bill that would update social studies requirements for Nebraska schools advanced from general file Feb. 26 after a successful cloture vote.

Peru Sen. Julie Slama, sponsor of LB399, said the bill would be the first major revision to the state’s civic education standards since the Americanism statutes’ adoption in 1949. The law requires school boards to appoint three members to a committee on Americanism, which approves textbooks used in the teaching of American history and government.

Among other provisions, the bill would eliminate the current criminal penalty for violating the Americanism statutes’ provisions.

An Education Committee amendment, adopted 42-3, would remove the requirement that districts administer the exam and instead would make it one of three options a district would have to include in its curriculum.

A district also could require a student to attend or participate in a meeting of a public body and then complete a project or paper demonstrating what he or she learned or complete a project, paper or class presentation on a person, event or related topic from American history.

After six hours of debate spanning four days, Slama offered a motion to invoke cloture, or cease debate and vote on the bill. The motion was adopted 42-3. Thirty-three votes were needed.

After adopting a technical amendment, lawmakers voted 42-3 to advance the bill to select file.