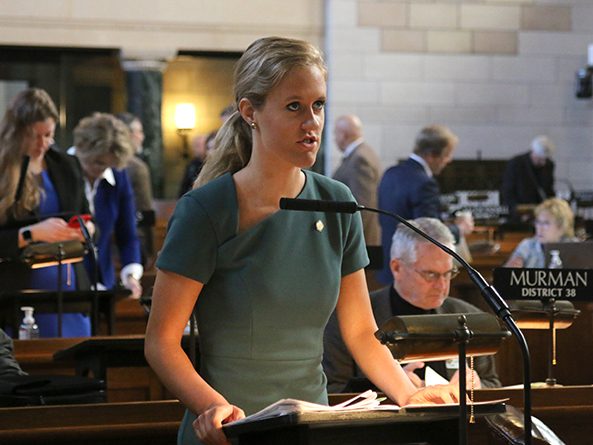 School boards currently are required to appoint three members to a committee on Americanism, which approves textbooks used in the teaching of American history and government.

LB399, introduced by Peru Sen. Julie Slama, would change the name of the committee to the committee on American civics. The new committee would be required to hold at least two public meetings annually and ensure that the district’s social studies curriculum is accessible to the public.

It also would ensure that the district’s curriculum aligns with state social studies standards and “teaches and assesses foundational knowledge in civics, history, economics, financial literacy and geography.”

Slama said some Nebraska students graduate from high school not knowing basic facts about the nation’s history or government, such as the three branches of government or the difference between a state senator and a U.S. senator.

“I’m not saying with this bill that all school districts in Nebraska are doing a bad job of civics education—far from it,” she said. “Most schools are doing an excellent job, but there are some where other subjects have forced civics education into the background.”

LB399 also would add to the list of days on which schools are required to conduct patriotic exercises, such as Dr. Martin Luther King, Jr.’s birthday and Native American Heritage Day.

The bill would eliminate the current criminal penalty for violating the Americanism statutes’ provisions.

A pending Education Committee amendment would remove the requirement that districts administer the exam and instead would make it one of three options a district would have to include in its curriculum.

A district also could require a student to attend or participate in a meeting of a public body and then complete a project or paper demonstrating what he or she learned or complete a project, paper or class presentation on a person, event or related topic from American history.

“Is it perfect? No … but the beauty of what we do is to strive to make something better,” Pansing Brooks said.

Bennington Sen. Wendy DeBoer said she would support the bill on general file but would work with Slama to change some of its language before the second round of debate. It is “vitally important” that students learn about American history and government, DeBoer said, but those lessons should be nuanced and clear about the nation’s flaws.

“We owe our students some education on the messy world of our civic life together, imperfect as it is, so they can perhaps do better than us,” she said.

Sen. Lou Ann Linehan of Elkhorn also spoke in support, agreeing that students should learn both the good and the bad about U.S. history. Beginning in third grade, she said, Nebraska students are tested on their knowledge of math, science and English.

“But we are not assessing in any way their knowledge of civics or history or of government or of their rights,” Linehan said. “It’s a void we need to address.”

Omaha Sen. Ernie Chambers opposed LB399 and filed a motion to bracket it until June 6, which effectively would end debate on the bill for the session.

Chambers said the committee amendment and the Americanism statutes include many words that are exclusionary or open to interpretation. He also criticized the committee amendment’s requirement that students would be taught to be “citizens who possess a deep understanding of and respect for the United States Constitution.” Chambers noted that the document contains four references acknowledging and perpetuating the enslavement of black Americans.

The Legislature adjourned for the week before voting on the committee amendment or LB399. The bill is scheduled for further debate Feb. 26.