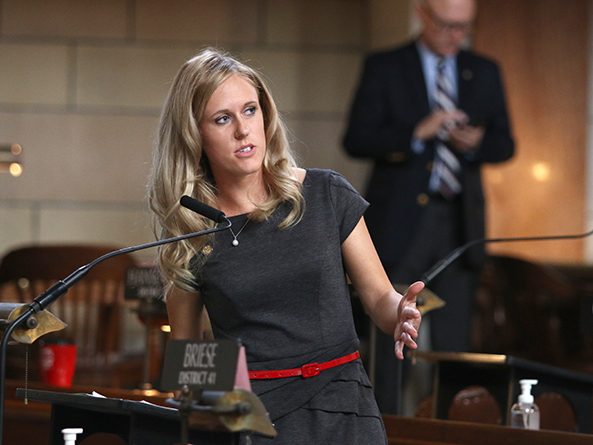 After three hours of debate over two days, a bill that would update social studies requirements for Nebraska schools stalled on general file Feb. 20.

School boards currently are required to appoint three members to a committee on Americanism, which approves textbooks used in the teaching of American history and government.

LB399, introduced by Peru Sen. Julie Slama, would change the name of the committee to the committee on American civics. The new committee would be required to hold at least two public meetings annually and ensure that the district’s social studies curriculum is accessible to the public.

It also would ensure that the district’s curriculum aligns with state social studies standards and “teaches and assesses foundational knowledge in civics, history, economics, financial literacy and geography.”

Slama said LB399 would be the first major revision to the state’s civic education standards since the Americanism statutes’ adoption in 1949. While most Nebraska school districts go far beyond the proposed requirements, she said, the bill is intended to ensure that all Nebraska students are taught the basics of government.

“Our nation’s history and government structure are simply too important to take a backseat to other core subjects,” Slama said.

LB399 also would add to the list of days on which schools are required to conduct patriotic exercises, such as Dr. Martin Luther King, Jr.’s birthday and Native American Heritage Day.

The bill would eliminate the current criminal penalty for violating the Americanism statute’s provisions.

A pending Education Committee amendment would remove the requirement that districts administer the exam and instead would make it one of three options a district would have to include in its curriculum.

A district also could require a student to attend or participate in a meeting of a public body and then complete a project or paper demonstrating what he or she learned. A student also could complete a project, paper or class presentation on a person, event or related topic from American history.

Lincoln Sen. Adam Morfeld supported the committee amendment and the bill. Morfeld said he opposed similar bills in the past because they also would have required schools to administer the naturalization exam, which he said is not a good tool for measuring civic engagement. Requiring students to participate in the political process is a better approach, he said.

“I think students should have to get involved with a political subdivision on an issue that they choose that’s important to them,” Morfeld said.

Columbus Sen. Mike Moser also supported the bill, saying it is more important than ever that students understand American history.

“If we have no historical reference and we don’t know how we got where we are, then we can’t have a legitimate chance … to move forward,” he said.

Omaha Sen. Ernie Chambers filed a series of amendments in order to delay a vote on the bill. Chambers said the Americanism statutes should be repealed because they require teaching a version of American history that does not embrace all Americans, especially black Americans.

Omaha Sen. Megan Hunt also opposed the committee amendment and the bill. She said she is skeptical about requiring the teaching of patriotic sentiments because patriotism can mean different things to different people.

Sen. Kate Bolz of Lincoln proposed an amendment, adopted 31-0, to strike a current requirement that the Americanism committee is to “assure themselves as to the character of all teachers employed and their knowledge and acceptance of the American form of government.” She said vetting of teachers is best handled through the existing contracting process.

Another Bolz amendment would have removed a provision in current law stating that neglect of the Americanism statutes is a dereliction of duty and cause for dismissal of any school employee or appointed official. It failed on a vote of 19-27.

The Legislature moved to the next item on its agenda before voting on the committee amendment or LB399. Per a practice implemented by Speaker Jim Scheer, the sponsor of a bill that is facing a potential filibuster must demonstrate sufficient support for a cloture motion before the measure will be scheduled for additional debate.