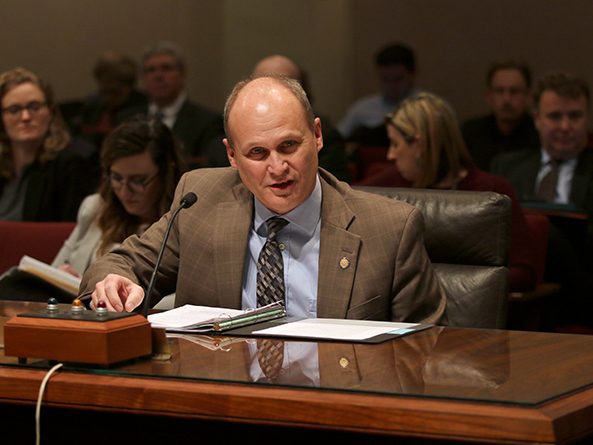 The Urban Affairs Committee heard testimony Feb. 19 on a bill that would allow municipalities throughout Nebraska to create or join land banks.

The bill also specifies that a land bank is prohibited from levying property taxes.

Land banks, Quick said, are a way to address two issues facing cities—abandoned or blighted properties and a lack of affordable housing.

“Land banks are designed specifically to address the large amount of problem properties that the private market has abandoned,” Quick said.

Marty Barnhart of the Omaha Municipal Land Bank testified in favor of the bill. Land banks can help lower housing costs in a number of ways, Barnhart said, including removing liens against a property that in some cases exceed a house’s value.

He highlighted several formerly blighted properties in Omaha that were acquired and renovated by the land bank and are now occupied.

Chad Nabity, regional planning director for the city of Grand Island, also testified in favor of the bill. As a house ages, its value and that of neighboring properties is eroded, Nabity said.

He added that there are 197 houses in Grand Island that are believed to be vacant.

Also speaking in favor of the bill was Norfolk Mayor Josh Moenning. He said a land bank would help add affordable homes to his growing community and would reduce the time police spend patrolling abandoned buildings.

“Omaha has used this tool quite effectively,” he said. “We are here today to ask that other Nebraska cities be afforded the same restorative neighborhood revitalizing tools.”

Coby Mach of the Lincoln Independent Business Association testified against the bill. He said it would allow a land bank to acquire properties instead of private developers.

“The private sector will have to compete directly with the land bank without being afforded the same tax breaks or benefits,” Mach said. “Maybe we should provide incentives to the private sector rather than expand government.”

Ann Post testified against LB424 on behalf of the Homebuilders Association of Lincoln. She said the bill would reduce property taxes collected by a municipality. Post said there are other ways of improving blighted properties, such as tax liens or donating a property to a nonprofit.

Also testifying against the bill was Jessica Shelburn of Americans for Prosperity. She called land banks a “risky, big-government” venture.

“Unfairly competing with the private sector is not the proper role of government,” Shelburn said.

The committee took no immediate action on LB424.