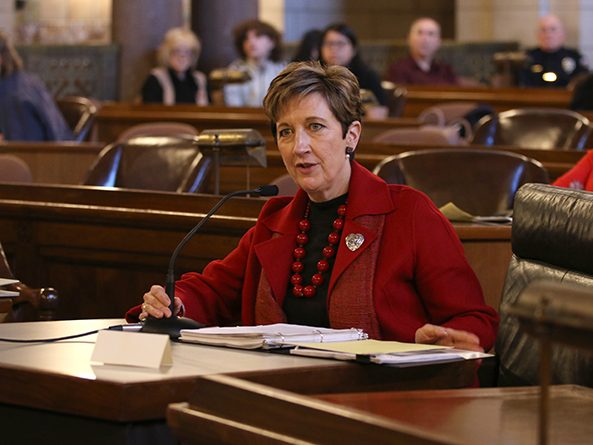 Members of the Judiciary Committee heard testimony Feb. 14 on a bill that would restrict the use of room confinement for juveniles.

The average length of a restrictive confinement at both of the state’s Youth Rehabilitative and Treatment Centers has decreased, she said, but the number of incidents at both facilities has increased.

“Far too often kids are being placed in restrictive confinement because facility administrators lose patience or because it may be more convenient,” she said. “[The bill] helps ensure we’re keeping children and staff safe in our facilities while helping children rehabilitate and become thriving members of our society.”

The bill specifies that room confinement could be used only after all other less-restrictive alternatives have been exhausted and the juvenile poses a serious and immediate security threat to themselves or others. The length of confinement would be restricted to the minimum amount of time needed to resolve any such threat while not harming the mental or physical health of the juvenile.

Confined individuals would continue to have regular access to medical and mental health treatment, meals, contact with parents and legal guardians, legal assistance and educational programming.

Notice of an offender’s placement in room confinement to their parents or guardians and attorney would be required within one business day.

Dylan Murphy of Omaha spoke in support of the bill. As a young person, Murphy said he was repeatedly placed in solitary room confinement and continues to suffer from emotional issues as a result.

“We know that adolescents have not had the life experience to gain the emotional resources and skills to manage the distress caused by solitary confinement,” he said. “It took almost 20 years for me to stop subconsciously waiting every moment of every day for someone to lock me in a room again for something they didn’t like about me or something that I’d done.”

Also supporting the bill was Juliet Summers, representing Voices for Children in Nebraska. She said LB230 would ensure that the state’s youth do not experience the harmful effects of long-term restrictive confinement.

“All youth in the juvenile justice system should receive rehabilitative services for a second chance to succeed,” Summers said. “[Outdated] and inhumane practices like the use of extended solitary confinement … mars children’s opportunity for rehabilitation and recovery.”

“Many are traumatized and they need to know that they’re unconditionally loved,” Miller said. “It is important juveniles have authentic relationships and that they can talk to someone nonjudgmental when they’re having a hard time.”

The committee took no immediate action on LB230.