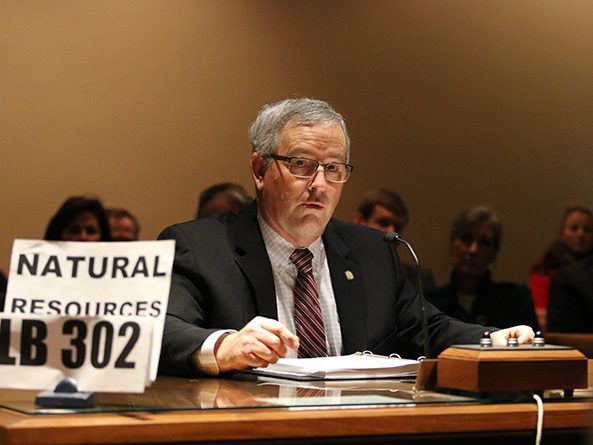 The Nebraska Energy Office serves as the central repository for energy data relevant to Nebraska and provides the public with information on energy sources, use and conservation, in addition to other duties. The state Department of Environmental Quality administers the rules, regulations and standards adopted to protect and improve water, air and land quality in Nebraska.

LB302 would authorize the newly created department to assume responsibility for a permit program related to the discharge of dredged or fill material consistent with section 404 of the federal Clean Water Act. The permits are required for any project that encounters “waters of the U.S.” as defined under the act. Federal law allows the program, which is administered by the U.S. Army Corps of Engineers and the Environmental Protection Agency, to be delegated to states with approved programs.

Hughes said private companies, cities and natural resources districts support the merger. He said he has “total confidence” in Director of Environmental Quality Jim Macy, who would lead the new agency and currently serves as interim director of the State Energy Office.

Macy testified in support of the bill, saying the two agencies have related functions and similar services that could be improved by combining their efforts. Macy said the merger also would cut redundant administrative jobs and aid succession planning at a time when 40 percent of state Department of Environmental Quality staff and 70 percent of State Energy Office staff are within five years of retirement.

Macy said the U.S. Army Corps of Engineers and the state Department of Environmental Quality review 404 program permits. State assumption of the program could eliminate that duplication of effort, he said.

“This would reduce the amount of time it takes to get a permit and accelerate job-creating economic development and infrastructure projects across the state while protecting water quality,” Macy said.

The state could assume permitting authority only with further action by the state Environmental Quality Council and funding from the Legislature, he added.

Craig Mielke, an environmental scientist with Omaha engineering firm Alfred Benesch & Company, testified in support of the bill on behalf of the American Council of Engineering Companies. He said Nebraska has an extensive framework of agencies and regulations to protect its more than 81,000 miles of streams.

“The additional layer of federal oversight [with the 404 permit program] is often onerous and duplicative to these regulations and could be more efficiently managed by the state,” Mielke said. “The number and proliferation of these resources makes it very difficult for private landowners, corporations and public agencies to undertake any project without encountering them.”

Pat O’Brien of the Upper Niobrara White Natural Resources District testified in support of the bill on behalf of the Nebraska Association of Resources Districts. He said many NRD water management plans require physically manipulating streams or building structures to control them—projects that require 404 program permits.

“Over the past few years, the time and expense to receive these permits has risen drastically,” he said, adding that the NRDs support state assumption of the program.

Jonathan Leo, an environmental attorney in Lincoln, gave neutral testimony on the bill. While making government more efficient when necessary is “unimpeachable,” he said, the Legislature also should ensure that the new agency maintains or enhances environmental protection standards for the state’s waterways and other natural resources.

“The most important thing … is not to lose sight of the original overlying purpose of these laws,” Leo said, “which is truly to protect the environment.”