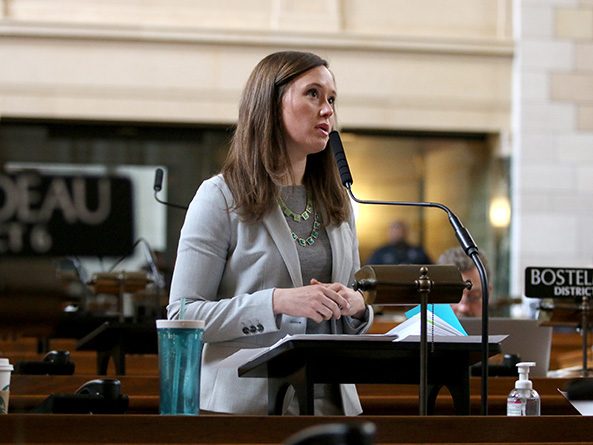 Lawmakers gave first-round approval April 9 to a bill that would allow driverless cars to travel on the state’s roads. The bill previously was discussed April 4 and 5.

LB989, as originally introduced by Lincoln Sen. Anna Wishart, would have authorized a city of the primary class to conduct a pilot project to test autonomous vehicles, which operate without a human operator. Currently, Lincoln is the only primary class city in the state.

Wishart said state statute currently is silent on the issue of autonomous vehicles. Implementing a regulatory framework would help Nebraska to become a national leader in autonomous vehicle technology, she said.

A proposed Transportation and Telecommunications Committee amendment would have authorized the testing of autonomous vehicles statewide under a special permit authorized by the state Department of Motor Vehicles.

However, O’Neill Sen. Tyson Larson introduced an amendment, adopted 32-1 April 5, that replaced both the committee amendment and the original bill. As amended, these provisions would authorize the operation of an autonomous vehicle on all state roads and highways, as long as the vehicle is capable of operating in compliance with traffic and motor vehicle safety laws.

An autonomous vehicle may or may not contain a human driver. If a human driver is present in the vehicle, he or she must be a licensed driver and covered by insurance.

Political subdivisions would be prohibited from imposing any additional performance requirements or taxes that relate specifically to the operation of an autonomous vehicle.

Henderson Sen. Curt Friesen introduced a motion to recommit the bill to the Transportation and Telecommunications Committee. He said fully autonomous vehicles still have not been approved by the Federal Highway Administration and are meant to be used only in pilot programs.

“The risk is too great to just open this up to all vehicles,” Friesen said. “We have no process in place where we can suspend this if something goes wrong.”

Papillion Sen. Jim Smith introduced an amendment, adopted 33-9, which would require the state Department of Motor Vehicles to consult with railroad companies before providing an exemption that would allow fully autonomous vehicles to cross railroads.

An amendment introduced by Friesen would have removed a provision allowing autonomous vehicles to deliver goods. It failed on a 20-26 vote. He then introduced a series of motions and amendments in an effort to extend debate on the bill.

Wishart offered a motion to invoke cloture, or cease debate and vote on the bill April 9. The cloture motion was adopted 37-8. Thirty-three votes were needed.

Lawmakers then voted 32-10 to adopt the committee amendment and advanced the bill to select file 33-13.