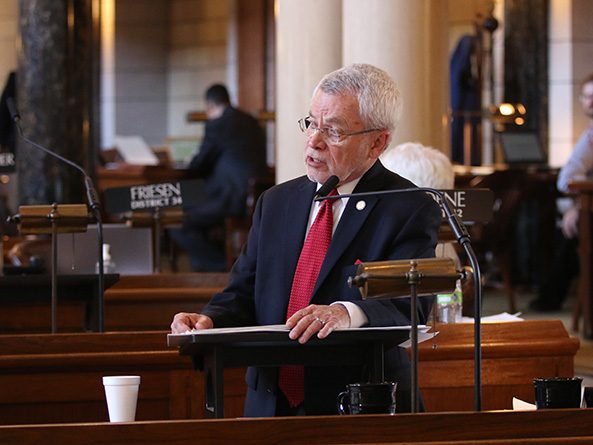 A bill that would have placed restrictions on delegates to a potential Article V convention of the states failed to advance from general file April 5.

LB1058, introduced by Hastings Sen. Steve Halloran, would provide the rules and procedures necessary to guide a delegation to an Article V delegation. Halloran said 28 out of the 34 states required to call a convention have done so and Nebraska must be prepared.

“As a state, we must be prepared to act when called,” he said. “This would provide the framework needed to effectively participate in a convention of the states.”

The Legislature would elect five delegates and five alternative delegates from its membership to represent the state at a convention. Both would be required to take an oath promising to not vote on any amendment to the U.S. Constitution that has not previously been approved by the Nebraska Legislature.

Additionally, the state attorney general would have sole authority in determining whether a vote is unauthorized.

Supporting the measure was Crete Sen. Laura Ebke. She said there needs to be a clear and thoughtful process in place to choose delegates who will represent the state’s interests most accurately and responsibly.

“It’s important to realize that LB1058 has nothing to do with the call of a convention, but is asking the Legislature to be prepared should a convention be called,” Ebke said. “There needs to be some sort of a structure because otherwise we’re just making it up.”

Lincoln Sen. Adam Morfeld opposed the bill. He said that once the convention begins, every part of the Constitution will be on the table.

“It’s so easy to have a runaway convention because there are so few guidelines and rules within that article of our Constitution to be able to guide a convention,” Morfeld said. “The last constitutional convention we had at the federal level is when we got rid of the Articles of Confederation and we ended up with an entirely different form of government.”
Also opposing the bill was Lincoln Sen. Kate Bolz, who said a convention called to pass a balanced budget amendment could have a devastating impact on the state’s budget. Nearly $3 billion in federal funding comes into the state budget, Bolz said, with $400 million going to the K-12 public school system alone.

“I have no problem with fiscal restraint … however, I think a convention of the states could make sweeping changes that have a significant impact on the quality of life in Nebraska,” she said. “What I think we imperil by empowering a convention of the states is rather than holding our federal delegation accountable, we kick it to the convention, which could make sweeping changes that will impact everything that we receive federal funds for.”

The committee amendment failed on a 20-24 vote.

LB1058 failed to advance on a 23-21 vote. It is unlikely to be debated again this session.