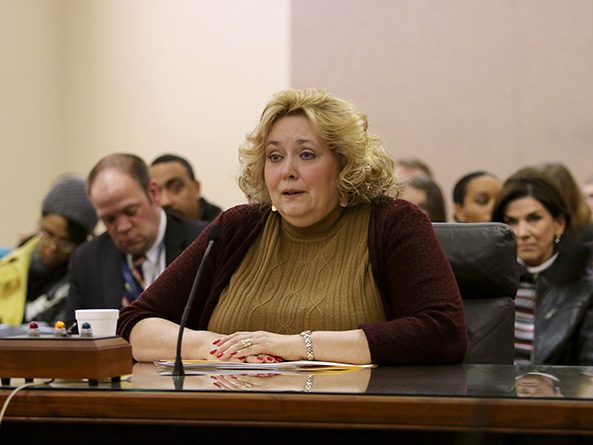 Members of the Judiciary Committee heard testimony Feb. 23 on a bill that would regulate the use of unmanned aircraft systems in several areas of statute.

LB693, introduced by Bellevue Sen. Carol Blood, would broaden the legal definition of intrusion to include the viewing of another person in a state of undress directly or through electronic means.

Blood said the bill would make Nebraskans safer during a time when technology is advancing too quickly for people to keep up. The bill would bring Nebraska in line with the 41 other states that have passed similar legislation, she said.

“This won’t hamper the good things drones can do for us,” Blood said, “but it will ensure that if someone is using one of these devices to intentionally harass anyone, they will be held accountable.”

The sharing or distribution of video or images obtained through electronic means would be a Class IIA felony under the bill. If the defendant is 19 or older and the victim is less than 18, the defendant would be required to register under the Sex Offender Registration Act.

Any person who intentionally causes an electronic device—including an unmanned aircraft—to enter the property of another in order to secretly peep into the dwelling of another person would
be guilty of a Class I misdemeanor.

The bill would prohibit operation of an unmanned aircraft within a horizontal distance of 500 feet or a vertical distance of 300 feet above any penal institution. Operation of an unmanned aircraft carrying a deadly weapon also would be prohibited. Violation of these provisions would be a Class I misdemeanor for a first offense and a Class IV felony for any subsequent offense.

The definition of interference with hunting, trapping, or fishing would be expanded to include using an unmanned aircraft to interfere with such activities. A person who engages in such interference would be charged with a Class III misdemeanor.

Duane Gangwish, representing the Nebraska Cattlemen Association, spoke in support of the measure. He said that livestock harassment can detrimentally impact the health of individual animals as well as entire herds.

“Emerging technologies hold the potential to revolutionize things affecting Nebraska agriculture,” Gangwish said. “However, these promising tools may cause significant harm to our animals when used with nefarious or reckless intent.”

“This would contribute to a confusing patchwork of regulations across the country,” Trail said. “We also already have current privacy and trespassing laws that would cover these issues in Nebraska.”

Dave Poole, representing Oracle Aviation, also spoke in opposition to the measure. He said it would significantly hamper a growing industry in Nebraska.

“Several universities and colleges in Nebraska are building drone training programs in an effort to really make Nebraska a national leader in the commercial drone operation space,” Poole said. “This bill would be a significant hindrance to that educational endeavor.”