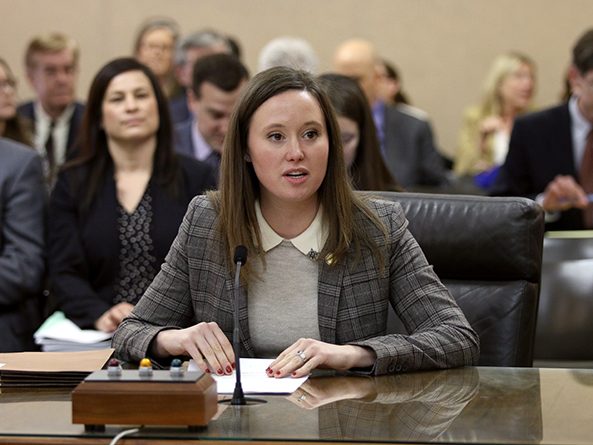 Driverless cars could be traveling on city streets under a bill heard by members of the Transportation and Telecommunications Committee Feb. 13.

LB989, introduced by Lincoln Sen. Anna Wishart, would authorize a city of the primary class to conduct a pilot project to test autonomous vehicles, which operate without a human operator in the vehicle. Currently, Lincoln is the only primary class city in the state.

Wishart said the bill reflects groundbreaking and leading-edge technology in both transportation and telecommunications. Lincoln is particularly poised for a pilot project, she said, because of its pioneering spirit.

Under the bill, any vehicle tested under the pilot project would be limited to an area within the city’s boundaries, designated by the city, and could not travel any faster than 35 mph. Before beginning the project, the city would be required to obtain insurance coverage, a surety bond or proof of self-insurance of at least $5 million for all claims per occurrence.

Verification must be submitted to the state Department of Transportation that:
• the vehicle had been tested in a controlled setting that closely resembles real-world conditions;
• the vehicle can operate in autonomous mode only in the designated testing area under the authorized environmental, traffic and speed conditions;
• the testing complies with all applicable Federal Motor Vehicle Safety Standards;
• the testing complies with National Highway Traffic Safety Administration Automated Driving Systems 2.0: A Vision for Safety;
• the vehicle is equipped with a communication link between the autonomous vehicle and a remote operator; and
• the vehicle is designed to detect and respond to roadway conditions in compliance with the Rules of the Road and local traffic regulations.

For testing purposes, the state Department of Transportation could require data collection to evaluate the safety of autonomous vehicles including, but not limited to, any collision involving property damage, bodily injury or death.

The city conducting a pilot project would be required to develop and submit a law enforcement interaction plan, which would inform how local law enforcement agencies interact with autonomous vehicles in emergency and traffic-enforcement situations.

Miki Esposito, director of Public Works and Utilities for Lincoln, spoke in support of the bill. She said one of the city’s responsibilities is to provide safe and reliable transportation options to citizens who need access to jobs, education and health care services.

The pilot project proposed under LB989 is an exciting, but logical first step in researching autonomous vehicle technology, Esposito said.

“This project represents an opportunity to carefully investigate and understand the impacts, issues, barriers, benefits and challenges associated with this technology,” she said. “[The project] is about information acquisition and sharing that information with other interested stakeholders.”

Also supporting the bill was Bruce Bohrer, representing the Lincoln Chamber of Commerce. He said the project could be a valuable economic development tool by dispelling misconceptions about Lincoln.

“The perception of Nebraska is that we’re behind the times,” Bohrer said. “This certainly helps in rebutting that image by embracing technology and looking ahead.”

Uber representative Carla Jacobs opposed the measure, saying it would show preference for a single provider, rather than supporting the general concept.

“By just authorizing one single pilot program, the state is essentially signaling to broad industry groups that it’s supporting the single entity that partners with [Lincoln] instead of broadly testing the most innovative technology available,” Jacobs said.

Nebraska would be best served by a comprehensive, statewide policy, instead of a localized pilot project, said state Department of Motor Vehicles Director Rhonda Lahm.