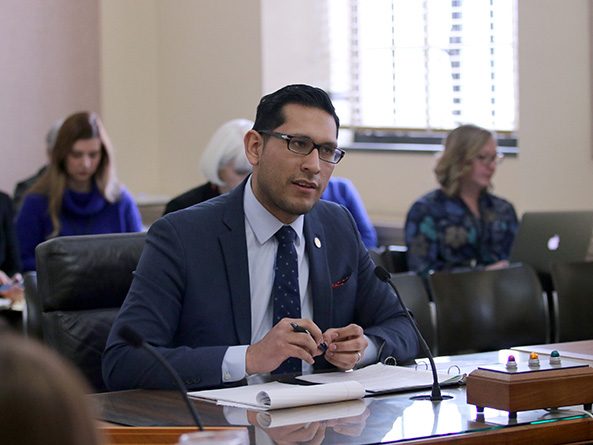 The Executive Board considered two proposals Feb. 5 regarding the Legislature’s redistricting process.

Currently, the Legislature is responsible for drawing new governmental boundaries every 10 years after the decennial census for districts pertaining to the U.S. House of Representatives, Legislature, Public Service Commission, University of Nebraska Board of Regents and the state Board of Education.

She said the bill is modeled on the Iowa process, which is widely respected by lawmakers and the public and has resulted in competitive districts and a smooth redistricting experience.

“It is innovative [and] nonpartisan and allows all parties to work together to create fair and even political districts,” Howard said.

Among other provisions, the act would require that new district maps be drawn using state-issued computer software and politically neutral criteria, including:
• equal population;
• contiguous districts;
• no political affiliation data;
• no previous voting data;
• deference to county and municipal lines when appropriate; and
• only data and demographic information obtained from the U.S. Bureau of the Census.

The Redistricting Committee of the Legislature would be required to hold at least one public hearing in each congressional district to receive input on the maps. The committee then would deliver a report on those hearings to the Legislature.

The director of the Office of Legislative Research would deliver initial versions of the maps to the Legislature, to be placed on general file no later than 15 calendar days after the director receives the federal decennial census data from the U.S. Bureau of the Census.

No changes other than corrective amendments would be allowed to the initial version of the maps. The Legislature would have three attempts to pass redistricting maps. If unsuccessful, the act would provide for the governor to call a special session within 30 days after adjournment of the regular legislative session and the redistricting committee would begin the process again.

Also considered was LB974, sponsored by Omaha Sen. Tony Vargas, which would prohibit consideration of the political affiliation of registered voters, demographic information other than population figures and results of previous elections when drawing boundaries for legislative districts. Information required by federal law or the U.S. Constitution would be exempted under the bill.

Jack Gould of Common Cause Nebraska testified in support of both measures, saying clear guidelines would ensure that no political party is advantaged in the redistricting process and could help the state avoid lawsuits. The 1990 redistricting process resulted in litigation, he said, and term limits mean that legislative memory about how to avoid those problems has been lost.

“It’s all about making a process that’s respected and represents the true interest of the public,” Gould said.

John Hansen, president of the Nebraska Farmers Union, also spoke in support of both bills. The public has lost a great deal of faith in government and the political process, he said, and anything that can be done to promote high standards and transparency would be beneficial to restoring the public trust.

“The issues that are [raised] through redistricting are not only the practical part of how it is that districts actually get set up and how communities of interest are defined and captured, but there is also the public perception part of how all of that works,” Hansen said.

No opposition testimony was offered and the committee took no immediate action on either bill.