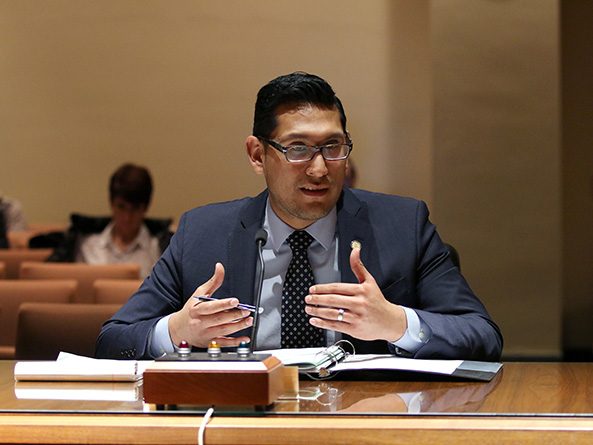 A tax increase on those with high incomes would pay for a tax cut for low- and middle-income Nebraskans under a bill heard by the Revenue Committee Feb. 2.

LB1074, introduced by Omaha Sen. Tony Vargas, would adjust the state’s existing individual income tax brackets and add a new fifth bracket with a rate of 7.84 percent. It would apply to those earning at least $100,000 if filing individually and at least $200,000 if married filing jointly.

Vargas said the additional tax on high earners would more than make up for an increased number of low- and moderate-income earners paying lower rates. The state could use the additional revenue generated by the tax increase to help make up its current budget shortfall, he said.

“Without raising revenue, children and seniors will face cuts to services they rely on,” Vargas said. “Programs that protect the safety of our water and our roads will be cut again. The university and state college budgets will be cut again.”

The state currently provides a refundable income tax credit equal to 10 percent of the federal Earned Income Tax Credit, which is designed to help working families with low to moderate incomes. LB1074 would increase the state credit to 12 percent.

Tiffany Joekel, policy director at the OpenSky Policy Institute, testified in support of the bill. By expanding the state’s third income bracket, she said, LB1074 would allow more Nebraskans with moderate incomes to pay income taxes at the 5.01 percent rate instead of the 6.84 percent rate.

“The important thing is that it raises revenue on the top and puts that revenue into tax cuts for low- and moderate-income folks,” Joekel said.

Aubrey Mancuso, executive director of Voices for Children, also testified in support of LB1074, especially its proposed increase in the state EITC. She said the EITC is widely recognized as one of the most effective anti-poverty programs in the nation and currently keeps approximately 19,000 Nebraska children out of poverty.

“We are supportive of the balanced approach that [LB]1074 takes when ensuring that Nebraska will … be able to invest in programs that support vulnerable children while providing tax relief to their families.”

Nicole Fox, director of government relations for the Platte Institute, testified in opposition to the bill. If LB1074 were implemented, she said, Nebraska’s top rate of 9.84 percent would rank fourth highest in the nation after California’s 13.3 percent, Oregon’s 9.9 percent and Minnesota’s 9.85 percent. Other states that have enacted a millionaires’ tax like the one proposed by LB1074 saw many of their high earners flee for states with lower rates, Fox said.

“If the state decides to pass LB1074, there will be negative consequences for our state and we will surely drive away wealth,” she said.