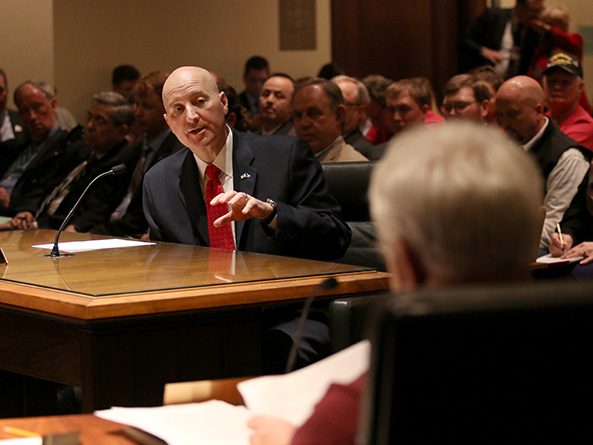 The Revenue Committee heard testimony Jan. 31 on a proposal to cut the state’s top individual and corporate income tax rates and to provide credits on property taxes paid.

Introduced by Papillion Sen. Jim Smith on behalf of Gov. Pete Ricketts, LB947 would eliminate the state’s current property tax credit program and instead would provide Nebraska homeowners and agricultural or horticultural land owners a refundable state income tax credit equal to 10 percent of property taxes paid beginning this year. The credit would apply only to Nebraska residents.

The bill would cap the credit at $230 this year. Increases in the credit would be triggered if state revenue exceeds forecasts, but they would be limited to $730.

Smith said LB947 is a “work in progress” and the subject of continuing discussions with agricultural groups, businesses and citizens across the state in order to provide tax relief and grow Nebraska’s economy.

“Though it’s more than a framework,” he said, “we understand that it’s short of perfection.”

Smith said the bill also would strengthen Nebraska’s workforce by transferring $10 million to a job training fund over the next two years.

Ricketts testified in support of LB947, saying that the state can continue to grow its economy only if its tax rates are competitive with those in other states. The governor said that he and Smith will continue to work with all stakeholders to find ways to improve the bill.

“We’ve got to remember that we’ve all got to work together and that we’re going to have to compromise,” he said. “That’s the only way we’ll be able to find that consensus to get this bill to my desk.”

Ricketts proposed removing the tax credit triggers in the original bill. His change would instead increase the tax credit to 12 percent this year and 14 percent next year. After that, the credit would increase by 2 percent a year—except for 2020, 2023, 2026 and 2029—until it reaches a maximum of 30 percent in 2031.

Steve Seline, chairman of the Omaha Chamber of Commerce’s public policy council, also testified in support of the bill, saying that it would boost state economic growth. Reducing the corporate tax rate would allow businesses to pay higher wages and expand their operations, Seline said, and directing more funding to the state’s job training fund would help attract new businesses and benefit existing ones.

“This is a matter of competition,” he said. “This is about attraction and retention of employers and employees. This is about addressing Nebraska’s reputation as a high-tax-rate state.”

“We are seeking a solution that generates broad enough support in this Legislature that it can be passed this session,” he said.

Testifying in opposition to LB947 was Renee Fry, executive director of the OpenSky Policy Institute. She said the proposal would mostly benefit wealthy Nebraskans while low- and middle-income families would see nominal or no tax relief. Recent federal tax cuts have created uncertainty in state revenue, she added, and Ricketts’ proposed increase in tax credits would increase the measure’s cost.

“Whether it’s triggered or not, it still puts tax policy on autopilot,” Fry said. “You can always pass tax cuts in the future when we’re on a stable footing, rather than in the middle of a continued budget shortfall.”

John Hansen, president of the Nebraska Farmers Union, also testified in opposition to the bill. He said the proposal would not provide enough property tax relief for Nebraska farmers, who are facing the worst crisis since the mid-1980s.

“What we are hoping for this legislative session is something that provides more real, tangible property tax relief than what this bill offers,” he said.

Also testifying in opposition was Jordan Rasmussen, policy associate for the Center for Rural Affairs. LB947 would exacerbate the imbalance between state property tax and income tax collections, she said, and it would not address the state’s overreliance on property taxes to fund public education and local governments. Paying for the income tax rate reduction could force the state to cut government services, Rasmussen added.

“Rural Nebraskans are desperate for property tax relief—this act recognizes it,” Rasmussen said. “Yet residents are not so naïve as to be willing to carry the burden of an income tax cut for the state’s wealthiest residents while forgoing access to healthcare, education and public safety, which uphold their communities.”