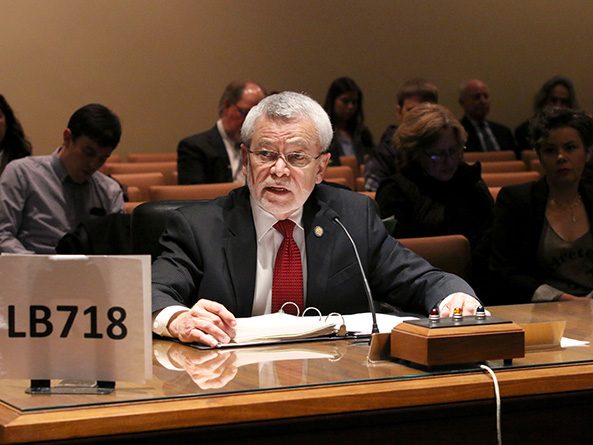 The University of Nebraska would be required to adopt a detailed policy governing free expression on its campuses under a bill heard by the Education Committee Jan. 30.

LB718, as introduced by Hastings Sen. Steve Halloran, also would require the University of Nebraska’s Board of Regents to create a nine-member committee that would submit an annual report to the Legislature, the governor and the university’s governing body.

The report would describe any “barriers to or incidents of disruption of free expression”—such as attempts to block speakers and investigations into student organizations for their speech—and what disciplinary action was taken against those determined to be responsible. The report would be posted on the university’s website.

Halloran brought an amendment that would make those provisions apply to the governing bodies of Nebraska’s community and state colleges in addition to the University of Nebraska.

Halloran said free expression is under attack on college campuses across the nation, including at the University of Nebraska, where a graduate lecturer confronted an undergraduate student recruiting for a conservative organization on its Lincoln campus last August.

“We need to restore the public trust—that the rights that students, faculty and guests have to free expression will be protected within institutions of higher learning,” he said.

Halloran said he was encouraged that the Board of Regents last week adopted a statement expressing the university’s commitment to free expression. He said his bill still is necessary, however, because the university’s policy would not apply to state colleges and community colleges. Putting the requirement into law also would ensure that the board could not weaken the policy in the future, Halloran said.

Testifying in support of the bill was Joe Cohn, legislative and policy director for the Foundation for Individual Rights in Education, a nonprofit that works to protect individual rights at colleges and universities. Cohn said he was working with Halloran to draft a new amendment to address concerns that the proposal would not comply with a 1977 Nebraska Supreme Court ruling that the Legislature cannot dictate policy to the Board of Regents.

The new amendment should direct regents to adopt a policy promoting free speech on campus without infringing on the rights of students, faculty and guests to engage in expressive activities protected by the First Amendment as long as those activities are not “materially disruptive,” Cohn said. This would give the board broad discretion in implementing such a policy, avoiding any conflict with the supreme court case.

Cohn said the university still has work to do to ensure that its day-to-day policies and operations conform to its new free speech policy.

“They should be commended for taking an important step in the right direction,” Cohn said, “but they haven’t solved their problem on free speech.”

Rob Schafer, chairman of the University of Nebraska Board of Regents, testified in opposition to the bill, saying that it would infringe on the board’s constitutional authority to govern the university.

He said the policy adopted last week reinforces the university’s commitment to free speech and directs each campus to clearly communicate which facilities are open to the public and which are not, such as classrooms.

“We are for free speech—unequivocally so,” Schafer said. “The university must be a place where ideas can be freely exchanged and where robust and open dialogue can occur.”

Jay Grabow read a statement in opposition to the bill from Courtney Lawton, the graduate student lecturer involved in the August incident. Lawton wrote that LB718 is designed to suppress dissenting political opinions, not to protect free speech.

After the encounter with the undergraduate student last year, Lawton wrote, she received threats and was removed from the classroom because of concerns for her and her students’ safety. She said members of the Legislature later pressured the university into barring her from teaching there.

“The very people that claim to be protecting academic freedom and free speech with this bill are the ones who have spent the last five months destroying my life and interfering with my scholarship because they disagree with my politics,” she wrote.

Julie Nichols testified in opposition to the bill on her own behalf. The proposed policy would be redundant because freedom of expression already is covered by UNL policy and the First Amendment, she said. The bill would restrict free discourse and those who must practice it in their duties as teachers and administrators, Nichols added.

“LB718 actually and ironically seeks to violate the First Amendment by interfering in the processes of academic free speech through an undue focus on reporting, monitoring, targeting and sanctioning those who violate the provisions of the bill,” she said.

Also testifying in opposition was Danielle Savington, a lawyer from Lincoln. Requiring a publicly available report on disciplinary action regarding violations of free expression on campus could lead to threats against both faculty and students involved in those incidents, she said. Nichols added that the policy treats college students like “addle-minded children.”

“They may be young, but they are adults,” she said, “and they have the right and the duty to go to college and be exposed to ideas that they don’t necessarily hold closely and dearly to their own hearts.”