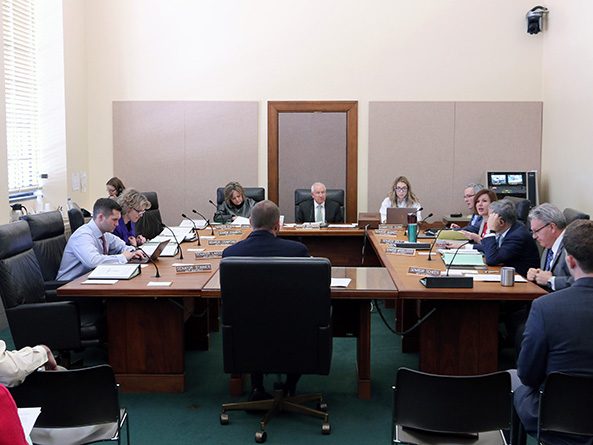 A bill intended to improve oversight of the state’s tax incentive programs by strengthening reporting requirements was considered Jan. 24 by the Executive Board.

LB935, introduced by the Legislative Performance Audit Committee, would make an array of information regarding the programs available and accessible to the Legislative Audit Office.

“One of the requirements for the audits is that the Audit Office recommend statutory or other changes that would make it easier to evaluate tax incentive programs into the future, including changes to data collection, reporting, sharing of information and clarification of goals,” Kuehn said.

Under the bill, the state departments of Revenue and Economic Development would be required to share with each other the names, addresses and identification numbers of companies participating in tax incentive programs.

The state Department of Revenue also would be required to retain relevant tax incentive program information for the duration of each program and for five years after the last participating company ends its participation.

Administrative records and data required under the bill would include:
• tax returns and audits;
• contract agreements;
• administrative databases and spreadsheets; and
• correspondence between taxpayers and the department relating to participation in a tax incentive program.

Additional requirements would include information pertinent to a specific incentive program, such as employment numbers and annualized wages according to the reporting requirements of the program.

Kuehn said the changes would allow the Legislature to determine whether companies are receiving incentives from more than one program, result in better program evaluation and generally provide more meaningful information to the Legislature. He noted that $842 million in total tax credits have been earned to date through the state’s incentive programs.

Renee Fry, testifying on behalf of the OpenSky Policy Institute, supported the bill. While tax incentives are an important economic development tool, she said, research finds that tax incentives do not pay for themselves.

For example, Fry said, jobs that pay at least $26,146 annually qualify for incentives under the Nebraska Advantage Program even though a family of three—the average family size in Nebraska—supported by that wage would be eligible for low-income state benefits such as food assistance.

“If we plan on incentivizing businesses, we need to make sure that taxpayers are receiving a good return on their investment,” Fry said.

Chad Denton, testifying on behalf of the Nebraska Chamber of Commerce and the Omaha and Lincoln chambers, opposed the bill. Current requirements for participation in the state’s tax incentives programs are extensive, he said, and the governor has recognized the need to reduce regulatory burdens on businesses.

“We are very concerned about further regulation when there is already a significant amount of detail provided by the participants,” Denton said. “This seems like more regulatory requirements on top of what we already have.”

The committee took no immediate action on LB935.