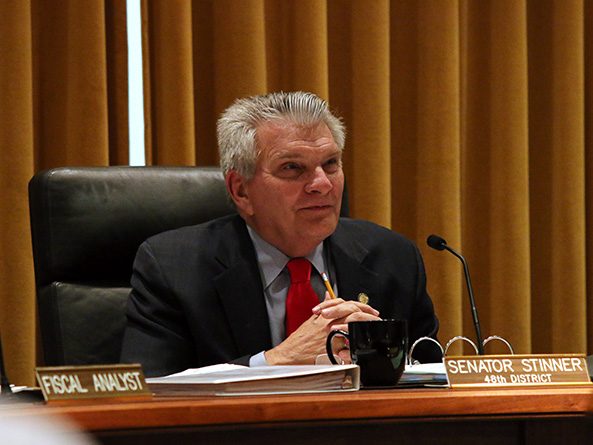 Mid-biennium adjustments to the state’s budget package were considered by the Appropriations Committee Jan. 22. The state budget is structured on a two-year basis, with the budget passed in odd-numbered years and adjustments made during legislative sessions held in even-numbered years.

Presented to the committee by State Budget Administrator Gerry Oligmueller, the bills would make cost-saving adjustments in the current fiscal year ending June 30, 2018, as well as the next fiscal year. Oligmueller said the adjustments are required to address a $173 million budget gap resulting from a downward revision in forecasted tax receipts.

He said that a balanced budget for the biennium would be achieved in part through the governor’s recommendation of an overall reduction of $48 million in general fund appropriations in LB944. The bill would eliminate $1.1 million in fiscal year 2017-18 reappropriations and includes a 2 percent across-the-board reduction in certain state agency appropriations in FY2017-18 and 4 percent in FY2018-19.

The result, Oligmeuller said, would be a cash reserve balance of $273.9 million at the end of the current biennium.

“As always, we look forward to working with you as you consider mid-biennium budget adjustments during this 2018 session of the Legislature,” he said.

Meg Mikolajczyk, associate general counsel for Planned Parenthood of the Heartland, testified in opposition to a provision in LB944 that she said “seeks to completely restructure and likely dismantle Nebraska’s Title X program.”

Mikolajczyk said Title X is a substantive policy issue that operates outside the budget process and should be handled by a committee with proper subject matter jurisdiction, likely the Judiciary Committee.

“I’m not here today to testify on the merits of this proposed policy change,” Mikolajczyk said. “Rather, my testimony is focused on process. I encourage this committee to find another way—absent the budget bills—to determine whether or not this Title X proposal is an appropriate policy endeavor and worthy of becoming law.”

Gering Sen. John Stinner, chairperson of the committee, said that a separate hearing on the Title X provision will be held Feb. 5.

“I do appreciate your comments relative to the germaneness … is it germane to this committee? That’s an interesting discussion,” Stinner said.

Also testifying in opposition to LB944 was Jane Polson, president of Keep Nebraska Beautiful. She said a proposed $900,000 transfer from the Waste Reduction and Recycling Incentive Fees Collection Fund to the General Fund would jeopardize important programs across the state.

She said many community organizations dedicated to reducing litter and waste and promoting recycling would have great difficulty continuing operation without a guaranteed source of funding.

“My fear is that these long-standing organizations will simply close their doors,” Polson said.

No proponent testimony was offered on the budget proposal and the committee took no immediate action on the bills.