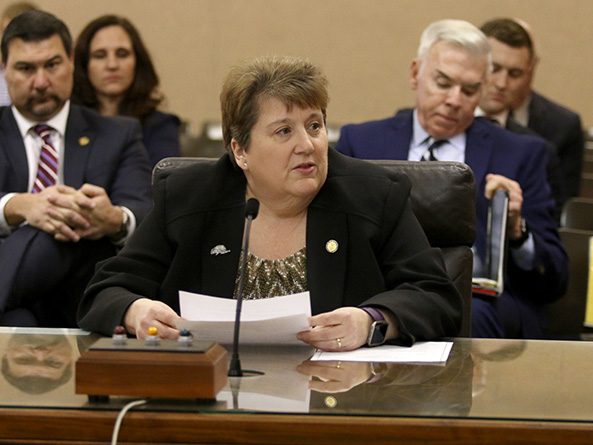 The Judiciary Committee heard testimony Jan. 19 on two bills that would help equalize caseloads in the district court system.

Under LB696, introduced by Crete Sen. Laura Ebke, the number of judges serving Judicial District 4 would increase from 16 to 17. The proposal comes as a recommendation from the Judicial Resources Commission, she said, and would ensure efficiency and maximum service across the state in the district court system.

Joseph Howard, representing the Nebraska Criminal Defense Attorneys Association, spoke in favor of the bill. He said judges are struggling to keep up with caseloads, which negatively impacts people awaiting trial.

“In terms of getting cases in front of judges, what we’ve seen is that a lot of our clients cannot post bond because they don’t have the money,” Howard said. “In terms of equal access to justice, that means they sit in jail and the longer the sit, the longer they suffer.”

Nebraska State Bar Association President Tim Engler spoke in favor of adding a judge in District 4 instead of moving a judge from another district. Reallocating judgeships sometimes can fix shortages in one area of the state, he said, but often can create problems elsewhere.

“We are able to reallocate in our system, but it is a difficult thing to do,” he said. “If we take a judge from a rural part of the state, what is that doing to access to justice for people in that part of the state?”

Nebraska Supreme Court Justice Stephanie Stacy spoke in support of the bill in her capacity as chairperson of the commission. She said all affected district court judges were consulted when developing the proposal and none opposed the decision.

“This would ensure access to the courts and better balance the judicial workload without adding any judges or moving any judges to address this particular issue,” Stacy said.

Engler also supported LB697. He said properly allocating judicial resources to where they are most needed is synonymous with access to justice.

“If you’re sitting in a courtroom for three hours and your case still has not been called, that really isn’t equal access to justice,” he said. “By doing these small boundary changes, we can reallocate our resources to improve that access.”

No one testified in opposition to either bill and the committee took no immediate action on them.