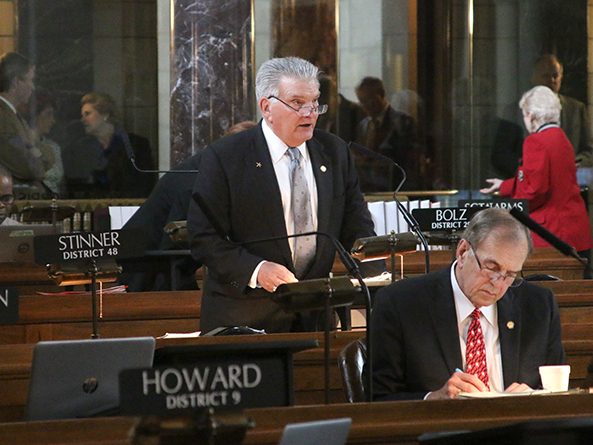 Lawmakers debated a bill May 10 that would allow certain cities to use tax increment financing (TIF) to support the construction of workforce housing.

Introduced by Gering Sen. John Stinner, LB496 would authorize cities of the first and second class and villages to include the construction of single-family or multi-family housing as part of a redevelopment project eligible for tax increment financing.

“Expanding availability of TIF for the construction of workforce housing will make these homes more affordable for middle income workers wishing to locate to rural communities,” he said.

The bill would require a municipality to receive a housing study, prepare an incentive plan for the construction of housing meant for new or existing workers and hold a public hearing on the plan.

After the hearing, the municipality would be required to determine that the plan is necessary to prevent the spread of blight and substandard conditions within the municipality, will promote additional safe and suitable housing for people employed there and will not result in the unjust enrichment of any individual or company.

Sen. Matt Williams of Gothenburg supported the bill, saying that a lack of housing is the largest obstacle to economic growth in rural Nebraska. Lincoln County had more than 700 job openings in December 2016, Williams said, but only 55 houses were for sale in North Platte, the county’s largest city. Only 34 of those houses cost less than $150,000, he added.

“One of the things that I have heard said about TIF is that many of these projects would happen anyway,” Williams said. “In the case of rural housing … we know that’s not the case or there wouldn’t be the need that I just talked about.”

In opposition to the bill was North Platte Sen. Mike Groene, who said that TIF was intended to be used for urban renewal, not as a statewide economic development tool. He said using TIF diverts property tax revenue from local governments and public schools, requiring the state to pay more in aid to schools and increasing the burden on taxpayers who already live in those communities.

“We have a property tax problem,” Groene said. “We need more new property on the tax rolls, not less.”

Sen. Curt Friesen of Henderson said he is conflicted about the bill. TIF is one of the only tools small cities and villages can use to encourage economic development, he said, but using it to build housing projects would increase enrollment at local schools while diverting property tax revenue away from those school districts. That would force rural districts — many of which do not receive state aid — to increase their property tax levies to make up the difference, Friesen said.

“We do need housing,” he said. “I wish there was a different method of bringing it in.”

The Legislature moved to the next bill on the agenda without voting on LB496.