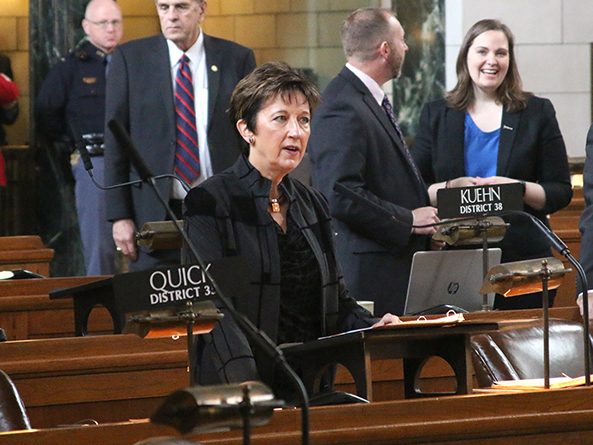 Judges would receive a pay raise under a bill advanced from general file April 5.

LB647, introduced by Lincoln Sen. Patty Pansing Brooks, would increase by 1 percent the salary of Nebraska Supreme Court justices, effective July 1. The raise would result in an annual salary of $173,694 annually. An additional 1.5 percent raise would take effect Jan. 1, 2019, increasing the justices’ salary to $176,299.

Pansing Brooks said the state’s judges adjudicate some of the most controversial cases impacting individuals’ most basic rights. Their pay must be commensurate with the work we ask them to do, she said.

“This would ensure judges’ pay is competitive in order to attract diverse and qualified candidates to work in our courts,” Pansing Brooks said.

The salaries of lower-court judges are tied to those of the Supreme Court justices and would increase by the same percentages.

Omaha Sen. Burke Harr spoke in favor of the bill, saying it is important to remember that serving as a judge is a form of public service. He said many judges leave lucrative jobs in private law firms when they are appointed to the bench and should be compensated competitively.

“This is very important if we want to retain competent judges, we need to pay them market value similar to what they would make [in the private sector],” he said.

Following the adoption of a technical committee amendment, senators advanced the bill to select file on a 31-0 vote.