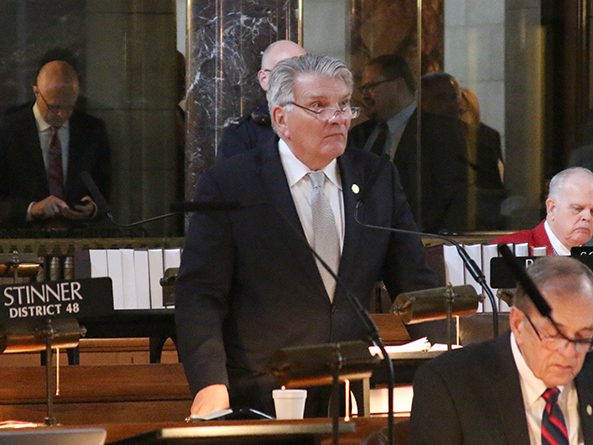 As introduced by Sen. John Stinner of Gering, LB151 would require any entity subject to a comment or recommendation by the auditor of public accounts to electronically submit a written report detailing any corrective action it has taken or plans to take in response. The bill would require the agency to submit the report no more than six months after the comment or recommendation was issued.

The auditor of public accounts then would evaluate the report and submit findings to the governor and the appropriate legislative committee. The bill also would require the auditor to deliver the report to the Legislature’s Appropriations Committee so that it could be entered into the record during the committee’s budget hearing process.

Stinner said current law requires audited entities to work with the auditor of public accounts during the audit, but agencies sometimes disregard audit reports after completion.

“It is imperative that the Legislature initiate a more substantive review process by maintaining contact with state agencies that have been subject to an audit,” he said.

A Government, Military and Veterans Affairs Committee amendment, adopted 30-0, would exclude the state colleges and the University of Nebraska from the requirement. It also incorporated provisions from the following bills into LB151.

LB27, introduced by Sen. John Murante of Gretna, would allow the state auditor’s office to penalize governing bodies that do not provide the auditor with requested information regarding trade names under which the body operates and any interlocal agreements to which it is a party by Sept. 20 of each year. The auditor could assess a late fee of $20 per day up to a maximum penalty of $2,000.

LB89, introduced by Sen. Dan Hughes of Venango, would reduce the period of public notice that a governing body is required to provide before holding a hearing on its proposed budget statement from at least five days to at least four calendar days.

LB90, also sponsored by Hughes, would require a public entity under audit or examination by the auditor of public accounts to provide the auditor with accommodations at the location where the requested records are kept. The accommodations would have to include desks or tables and chairs, electrical outlets and internet access if it is available.

LB101, also introduced by Stinner, would prohibit state agencies from extending any contract for services for a period of more than 50 percent of the initial contract term.

Stinner also introduced an amendment, adopted 35-0, that would prohibit the auditor of public accounts from revealing sealed or confidential court records contained in working papers.

Lawmakers then voted 35-0 to advance the bill to select file.