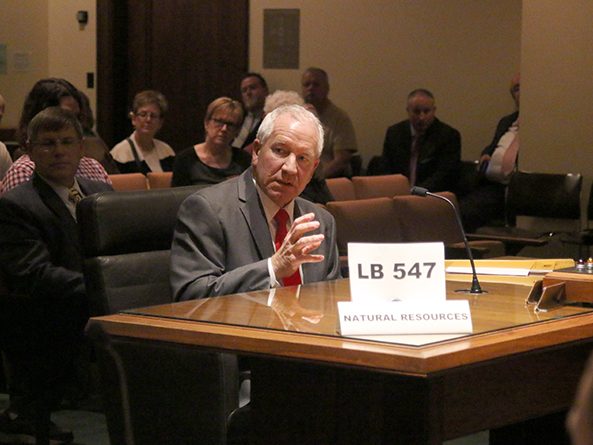 The Legislature passed a bill last year that removed public power districts’ authority to use eminent domain to seize renewable energy facilities. LB547, introduced by Sen. Dan Watermeier of Syracuse, would extend that protection to all private electric generation or transmission facilities.

The bill also would exempt privately developed electric generation or transmission facilities from review by the Nebraska Power Review Board (NPRB) if they meet certain requirements. Additionally, LB547 would repeal the existing prohibition on private electric suppliers from selling or delivering electricity at retail in the state.

Watermeier said the threat of eminent domain makes it difficult for private companies to secure financing to build electric generating and transmission facilities in the state. Nebraska is forgoing the jobs and property tax revenue that such projects would generate, he said.

“It seems our state policy is at cross purposes with our often-stated goal of helping bring economic development to our state,” Watermeier said.

The bill would not give private developers the right to use eminent domain, he added, and it would not prevent public utilities from using eminent domain to build new facilities.

Watermeier addressed concerns that allowing private electric generators in the state would result in an oversupply of electricity that would strand assets and strain existing infrastructure. Keeping private retailers out would not prevent that outcome, he said, because Nebraska is now part of the Southwest Power Pool (SPP), a group of utilities, power generation and transmission companies that oversees electricity infrastructure in 14 states.

The SPP is adding generating capacity in other states, which affects the market price of electricity the same as if the facilities were built in Nebraska.

“The boundaries of the state of Nebraska are not going to stop that,” Watermeier said.

“Public power having the ability to use the power of eminent domain to take private generation is keeping economic development out of Nebraska,” he said.

Philip Young of Americans for Electricity Choice also spoke in support of the bill. He said the Power Review Board’s reviews of planned projects are unnecessary now that Nebraska is part of the SPP, which determines the generation sources it will accept into its transmission network.

“Having the NPRB approve generation and transmission projects is an unwarranted barrier to stop projects from going forward even if they are determined to be acceptable by the SPP,” he said.

Testifying in opposition to the bill was Tom Richards, manager of governmental and community affairs for Omaha Public Power District. He said LB547 would open the state to private electric generators, undercutting OPPD’s ability to pay for existing infrastructure. The cost of those stranded assets would be passed on to customers, Richards said.

“Opening Nebraska to out-of-state electricity generators and introducing competition may sound like a good idea,” he said, “but in reality it has serious consequences and downsides.”

Shelley Sahling-Zart, vice president and general counsel for Lincoln Electric System, also testified in opposition to the bill, saying that it would provide virtually no state oversight of private generation and transmission projects. Currently, public utilities must prove to the NPRB that any new power plant would be a public convenience and a necessity, that there would be no duplication of facilities and that the plant is the most economically feasible option. Private developers would be required to do none of those things under LB547, she said.

“There is no accountability here,” Sahling-Zart said. “There are no consumer protections.”

John Hansen, president of the Nebraska Farmers Union, also spoke in opposition. He said private retailers have not served the state’s rural areas well in the past because it is more profitable for them to focus on areas with higher population densities and fewer miles of transmission line to maintain.

“We are a low-population state, we have a lot of miles to serve and the entire comprehensive, integrated system of public power works for our state extremely well,” Hansen said.

Tim Texel, executive director and general counsel for the Nebraska Power Review Board, provided neutral testimony. Texel said the bill would invert the common practice of states regulating private electric companies and exempting public power systems from oversight because they have elected boards.

“I’m not aware of any other state that would do what LB547 does,” he said.