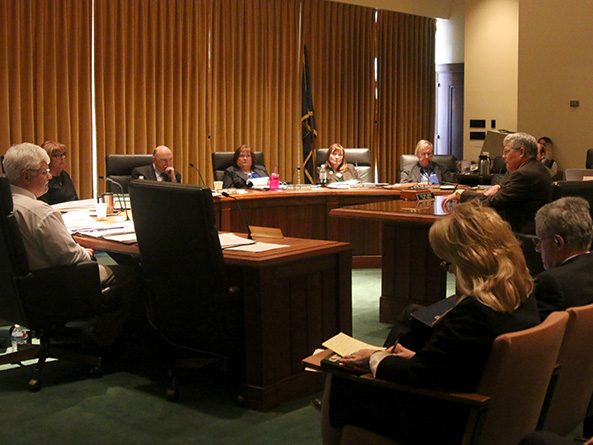 The Revenue Committee heard two bills Jan. 27 that would require some online retailers to collect sales taxes on Nebraska transactions.

LB44, introduced by Sen. Dan Watermeier of Syracuse, would require online retailers without a physical presence in the state to collect and remit sales tax revenue to Nebraska if their gross revenue in the state exceeds $100,000 or they make 200 or more separate sales transactions in the state.

LB564, introduced by Sen. John McCollister of Omaha, would apply to online retailers with annual sales as low as $25,000.

The state Department of Revenue estimates that Nebraska could collect an additional $30 million to $40 million in sales tax revenue from online retailers every year.

If a retailer would refuse to collect the tax, it would be required to notify Nebraska purchasers that tax is due and that the state requires them to file a sales or use tax return on their purchases. Each failure to notify would result in a $5 penalty.

Online retailers would be required at the end of each year to send Nebraska purchasers a notification detailing their purchases and to file an annual statement for each purchaser. Failure to meet either of those provisions would result in further penalties of $10 for each instance.

Nebraskans who purchase items online already are required to keep track of their online purchases and report any state taxes owed, but few opt to do so, Watermeier said.

“The longer we wait before passing legislation similar to this,” he said, “the harder it will be for the general public to understand that it is not a new tax.”

Both senators stressed that the current law puts local retail stores at a disadvantage to online sellers. McCollister said that when his wife owned a business she was continually frustrated to see customers come into her stores to look at merchandise but ultimately decide to purchase online to avoid sales tax.

“We continue to lose sales tax revenue because of the online sales trends, which not only affects our ability to fund essential public services but will ultimately increase our reliance on property tax,” he said.

Paul Briseno, assistant city manager of Kearney, also testified in support of the bill. Like La Vista, he said, Kearney relies on its local sales tax base to fund essential services that also benefit surrounding communities.

Half of Kearney’s 1.5 percent sales tax is used for property tax relief, he said, giving it one of the lowest property tax rates in the state. But two years of flat sales tax revenue has prompted the city to consider a rate hike and hire a retail consultant to help local businesses strengthen their sales.

Thomas Wright, co-owner of Wright’s Jewelers in Lincoln, also testified in support of the bill, saying it would ensure taxes are collected fairly. A sale is a sale, he said, whether it is made online or not, and sales taxes should be collected in each case. He said internet sales in his industry are projected to increase 15 percent each of the next few years.

“When we small businesses are gone, who’s going to pay for these streets?” he said. “Who’s going to pay the property taxes for your schools? Those online people aren’t going to come in here and do that.”

No one testified in opposition to the bills and the committee took no immediate action on them.