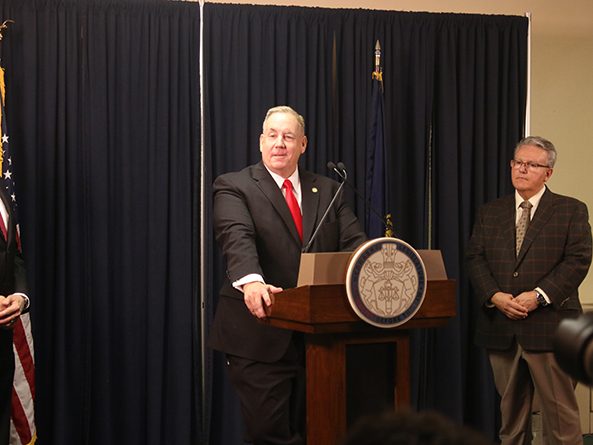 Sen. Bill Kintner of Papillion announced at a morning press conference Jan. 25 that he has resigned from the Legislature.

Kintner faced a surge of public anger this week after retweeting a comment about the recent Women’s March that appeared to make light of sexual assault. During floor debate on a separate issue yesterday, more than 20 senators rose to say Kintner should resign or face expulsion due to his pattern of behavior. Lawmakers said they had received a flood of angry emails and phone calls from constituents calling for his dismissal.

Last summer the Nebraska Accountability and Disclosure Commission fined Kintner $1,000 for the misuse of state property when he used a state-issued computer to engage in cybersex with a woman he met online. Kintner reported to the State Patrol that the woman tried to extort money from him to keep their exchange private.

Omaha Sen. Bob Krist filed a resolution yesterday to expel Kintner from the Legislature, and lawmakers were scheduled to take up that resolution Wednesday morning. Scheer notified senators of Kintner’s resignation when the Legislature convened at 9 a.m.

Gov. Pete Ricketts, who has repeatedly called for Kintner’s resignation since last summer, issued a statement shortly after the press conference saying that Kintner did the right thing by resigning. The governor’s office is accepting applications to fill the vacant seat for Legislative District 2 until Jan. 31. The district contains Cass County and portions of Sarpy and Otoe counties.

Eligible applicants must have lived in the district for at least one full year, be registered to vote and be at least 21 years old.